On February 14 Radiance of the Seas anchored off Yorkey’s Knob. From offshore we would tender into the port that serves Cairns, but Cairns was not on today’s agenda. We were instead slated to visit the oldest rainforest in the world, older even than the Amazon.

Getting there would entail taking an aerial tramway, not my favorite form of transport to be sure. You would think someone who spent over 34 years working in tall, skinny control towers, one with an open-air stairway, would not have a fear of heights. Guess again. That queasiness still remains. 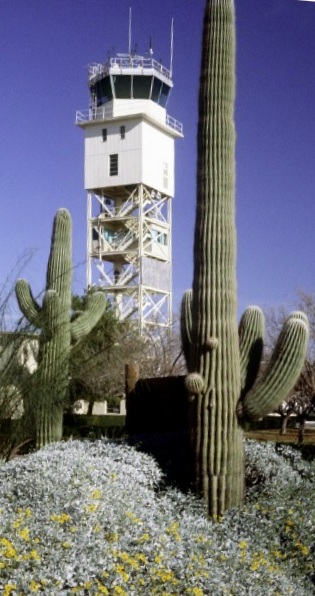 But returning to today’s topic, this is the Skyrail Rainforest Cableway. Fortunately, this was a one-way trip. Our return was decidedly more grounded, as you’ll see Wednesday when I take you aboard the Kuranda Scenic Railway for the return trip. 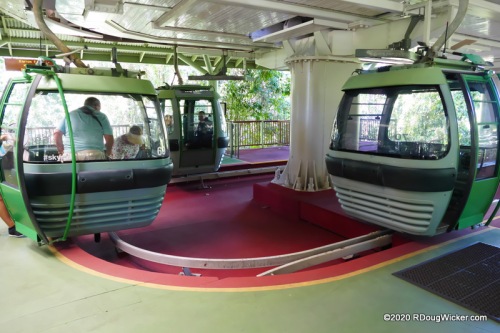 The Skyrail Rainforest Cableway station was just a short bus ride from Yorky’s Knob, lasting but a few minutes. We boarded our gondola and rose high above the Barron Gorge National Park.

Along the way we made a stop at the Red Peak station, where we alighted from our gondola and strolled into the rainforest. Here you’ll find a 575-foot/175-meter elevated boardwalk:

Walking around the rainforest at Red Peak Station

Here’s an interesting piece of Kuranda flora known  as a basket fern growing high atop a tree: 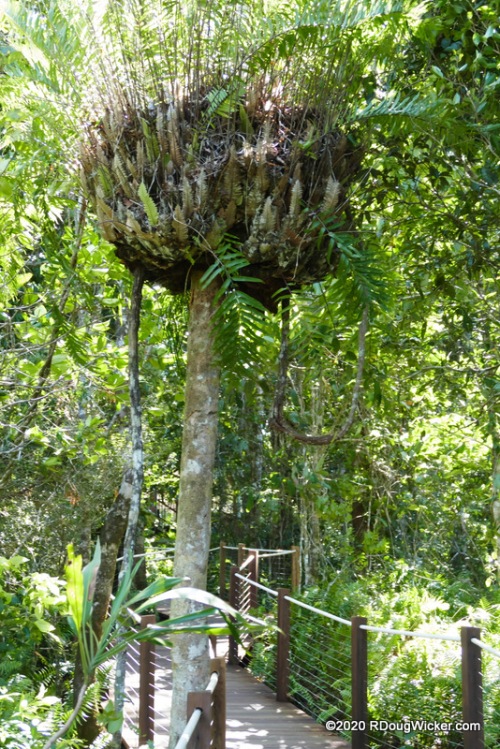 We had another stop along the way, and this was at the Barron Falls station. Alas, Barron Falls was not running very impressively today, and the view from this lookout was less impressive than the view of it during the return railway trip (which you’ll see Wednesday):

Barron Falls was a mere trickle this day

Still, the rainforest flora here was worth a view:

Flora at the Barron Falls station

One last look from the Skyrail Rainforest Cableway high above the Barron Gorge rainforest:

The world’s oldest rainforest — older than the Amazon!

Today I present my favorite shots of Brisbane and the nearby Lone Pine Koala Sanctuary. Here is Brisbane’s Central Business District: 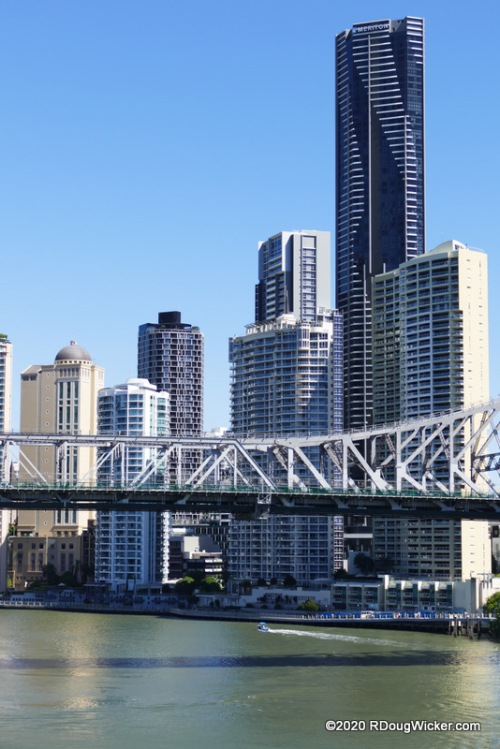 Remember from Monday the South Bank Parklands? One sight here that I did not show you was the Wheel of Brisbane:

Of course, I had to include a shot of Ursula posing with her new friend:

Ursula Posing with her New Friend

And, finally, I’ll leave you with these two friendly chaps: 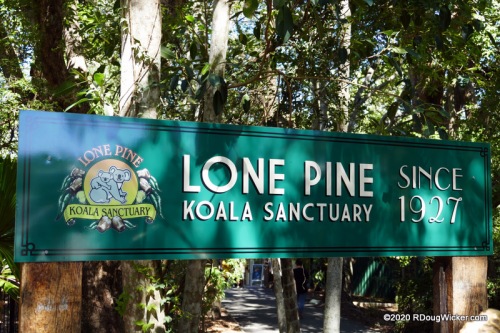 You’ll recall from Monday that Mount Coot-tha Lookout is about five miles/eight kilometers west southwest of Brisbane. Today we head south of Mount Coot-tha to the Lone Pine Koala Sanctuary, which is about 3.5 miles/5.6 kilometers away as the Australian raven flies. But were is that in relation to the rest of the world? Let’s take a look:

Only 11,565 kilometers to Los Angeles

And at least 5,000+ kilometers from anywhere outside Australia and New Zealand

Here at Lone Pine you’ll find many different indigenous mammals, birds, and reptiles. Many are quite tame, and you can even purchase species-friendly food to hand-feed them: 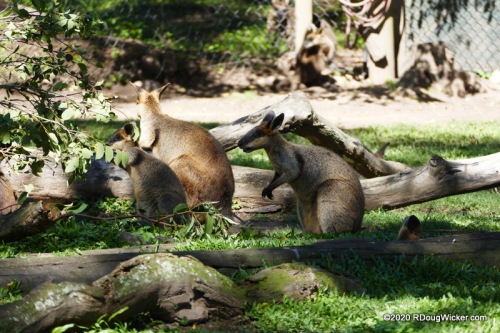 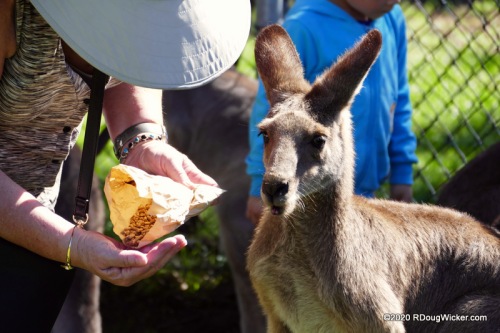 . . . and a taste for healthy kangaroo food

Ursula had a blast getting up close and personal with the resident kangaroos, as you can tell from her feeding one in the image above. Even the emu here are friendly. This guy enjoyed be petted and fawned over:

LiMu Emu on his day off

But, let’s face it, the stars of the show here at Lone Pine are the koalas: 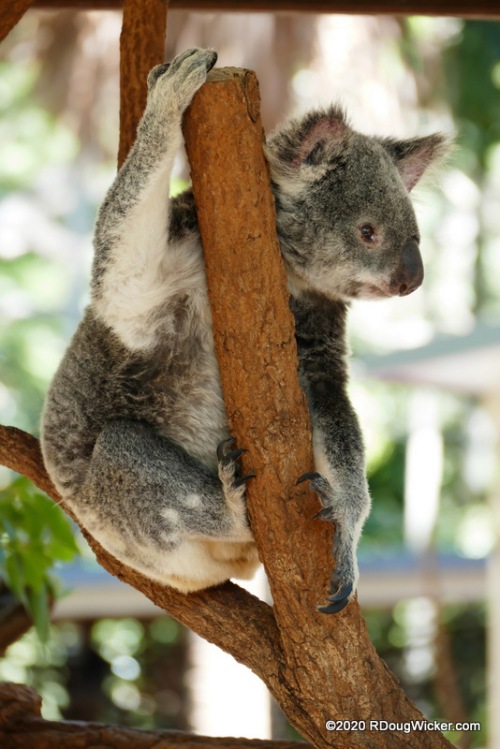 Cute, cuddly, and real hams before the camera. Yes, for a fee you can hold one, but those tree-climbing claws are sharp. If you do opt to hold one, you’ll be outfitted with protective vests and gloves. 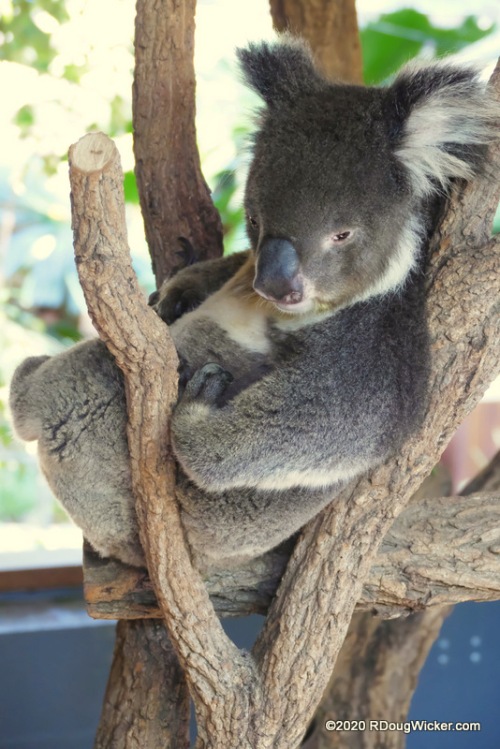 “Get me a Fosters, mate”