Today I’m going to reveal my secret to duplicating (as best I can) the incredible pastrami that comes from the incomparable Katz’s Delicatessen. It’s not that difficult to do, and although I’ll be the first to admit Katz’s is still better, I believe this comes as close as you’re going to get short of a trip to New York City. 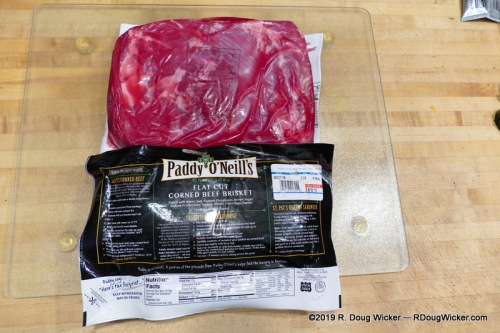 Start with a good corned beef

But before we work with the seasonings above, let’s prepare the corned beef briskets. Corned beef straight from the vacuum-sealed pack is rather salty, which is why you boil it. But you don’t want to boil a brisket that you’re going to smoke into pastrami, so forget that. Instead, soak your briskets in cold water for 24 to 48 hours, changing the water several times.

Now that the brisket is soaking, let’s get back to those spices. Using a mortar and pestle, or if you don’t have the patience, a spice grinder, crush together the pickling seasonings that came with the brisket along with additional black peppercorns and coriander to pad out the amount of seasoning available. 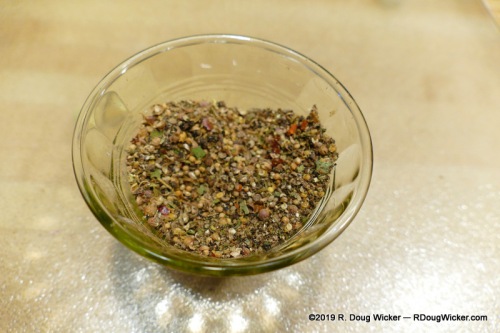 Crush spices with pestle or in a spice grinder

Now rub vigorously the spices into the corned beef briskets. Putting a little oil onto the meat while your doing this won’t hurt, either, but it’s not absolutely necessary. Wrap tightly the briskets in plastic wrap and refrigerate overnight.

The next day load up the smoker. Make sure to keep up your water levels to prevent the briskets from drying. Maintain a temperature of 225°F/110°C. What wood? Whatever you like. I used hickory, and that seemed to work just fine. I suspect apple, cherry, or even pecan would also work well. Keep up the smoke for at least three hours into the process, after which you can concentrate on just maintaining water levels.

Now smoke the briskets for at least six hours. When they’re ready to pull out of the smoker they should look something like this: 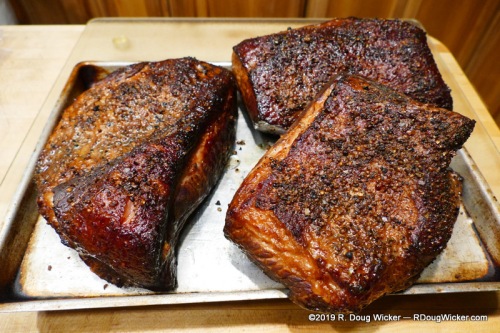 Six or so hours later

But you’re not done yet! If you’re having the pastrami the next day, allow the briskets to cool and then wrap tightly with plastic wrap and put them in the refrigerator. If you hunger for this for dinner, continue to the next step (which you would instead do the next day if you decided to wait). That next step is to place your briskets onto a rack over a roasting pan, and to place water into the pan below the level of the meat.

Place briskets on a rack over a roasting pan; add water to pan

Tent heavy duty aluminum foil over the roasting pan and rack, making sure that the foil does not come into contact with the meat. Wrap tightly the foil around the edges so as to trap steam from the water in the pan. 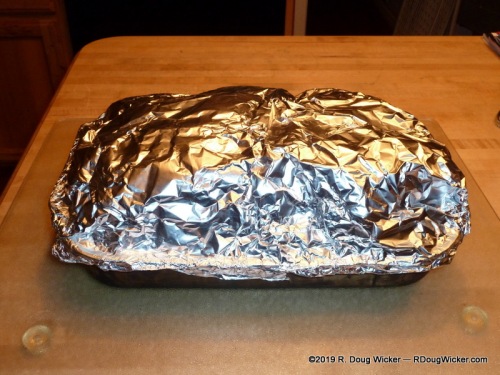 Tent tightly with foil and steam in the oven

Steam the smoked briskets in the oven between 250°F/120°C and 275°F/135°C for two to three hours — thicker steams longer; thinner steams less. Take the briskets out of the oven, keeping the meat, rack, and pan tightly wrapped. Allow to cool gradually for at least 30 minutes or so. Remove the foil while taking care to avoid steam burns! Now slice the brisket and thinly as you can.

Get a nice Jewish rye bread, some mustard, and a good quality Emmenthaler cheese (that’s what we call Swiss with holes), and build your sandwich! 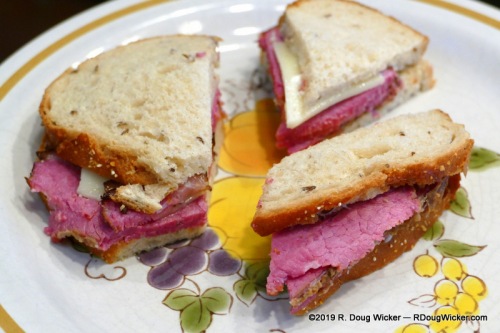 Serve on rye with a good imported Emmenthaler (Swiss cheese)

Normally, this is the point where I give a wine pairing. But, hey, we’re talking pastrami here. That calls for a light ale! If I absolutely had to pair a wine with pastrami, however, I believe I would lean toward a lighter, fruitier red. Here I’m thinking pinot noir, petite syrah, sangiovese/chianti, perhaps even a tempranillo. If I wanted something a bit more robust to compliment the smoke flavor, I might try a zinfandel, but a shiraz would probably be a grape too far.

Fun Food Friday — The Hawaiian Shrimp Truck in Your Kitchen 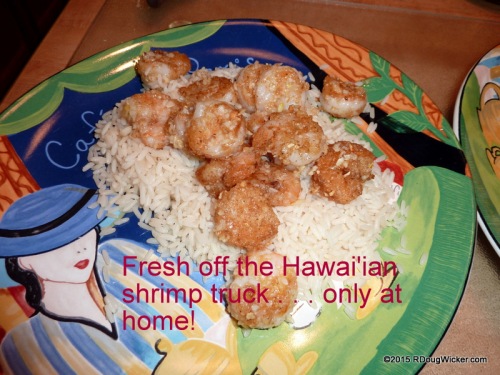 Fresh off the Hawai’ian Shrimp Truck? You would think so!

Instead of Fun Photo Friday I’m going with this week’s Hawaiian food theme and presenting a Fun Food Friday. Today I’m going to show you how to make at home that divine Hawaiian Food Truck staple, Hawaiian Garlic Butter Shrimp. You won’t believe how quick, easy, and tasty this dish is.

Ever wish you could get that true, fresh, off-the-truck Hawaiian garlic shrimp taste in the comfort of your own home? Here’s my attempt at doing just that, and it came out tasting very authentic indeed. 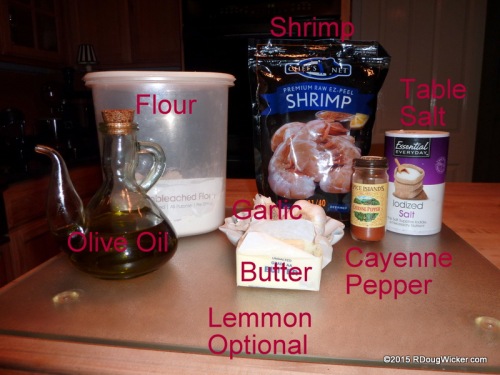 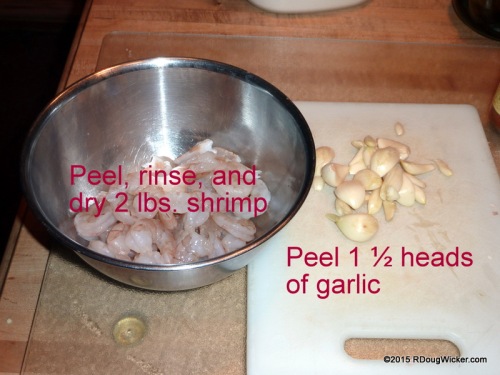 Peel and chop the garlic. 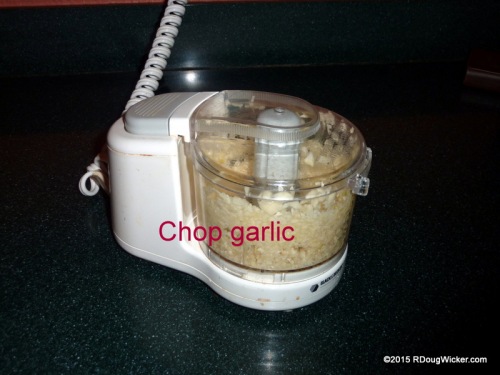 Mix together the flour, cayenne pepper, and salt.

Everything ready to go

Heat the olive oil in a skillet. Add the butter.

Heat the oil and add the butter

Toss the shrimp into the flour mixture and lightly coat them. If you didn’t pat the shrimp dry beforehand then too much flour will stick to them now. Add the shrimp to the hot oil and butter, but don’t crowd the pan as much as I did here. If you need to cook the shrimp in batches then reserve some of the chopped garlic and add more olive oil and butter to the skillet.

Too many shrimp in the pan!

Brown the shrimp on one side and then flip them over. Add the chopped garlic.

When the shrimp are lightly browned on the other side carefully flip the shrimp and garlic several time to coat the shrimp, cook the garlic, and flavor the butter and oil.

Toss in the garlic

At this point you may want to squeeze in some fresh lemon juice, but I prefer this dish without. The garlic and cayenne are flavor enough for me. Serve the shrimps and garlic-butter sauce (pan drippings, in other words) over rice. Ursula made a Swiss-style cucumber salad with this, and the coolness of the cucumber salad was a great counter to the garlic and cayenne pepper. 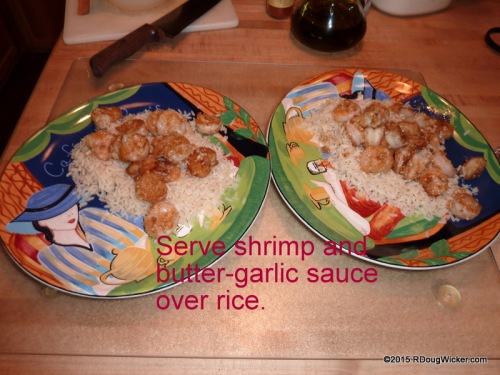 Variation: I suspect that this garlic shrimp dish would be equally at home over pasta, perhaps topped with some freshly diced Roma tomato and grated Parmesan and/or Romano cheese. You might even choose to substitute crushed red pepper for the cayenne to give it a more “Italian” flavor.

Wine pairing: Have to go with a white wine here. And the spices indicate to me that a Pinot Grigio may be the perfect accompaniment. This is especially true if you do the “Italian” variation suggested above. Or perhaps you might try a crisp, semisweet Johannesburg Reisling to offset the spiciness if you decide to increase the cayenne for a fierier version of the traditional Hawaiian style.

Blackened Pork Chops — Or Blackened Anything Else for That Matter 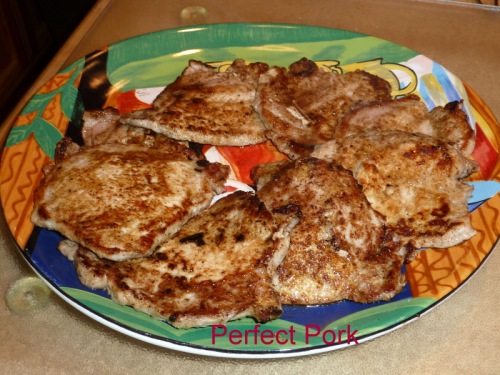 But before we get started let’s talk about the blackening seasoning.  This seasoning will remind you of the pricy premade stuff that comes in containers emblazoned with the likeness of certain celebrity chefs, but it’ll cost you a fraction of the amount and taste a whole lot fresher because you make it that way.  This blackening seasoning by the way is good for a whole lot more than just pork chops.  It also works exceptionally well with flattened chicken breast, fish (especially wild salmon), thinner-cut beef steaks, and other meats using the same basic cooking principles described below, although you wouldn’t want to pound fish.

Put the seasoning ingredients list above into a heavy-duty blender, preferably one such as the Vitamix with the dry ingredient blender.  You can use the blender that originally comes with your Vitamix, but over time hardened spices such as peppercorns will scratch up the inside of your container and make it cloudy.  It’s better in my view to just go ahead and get the attachment to take that abuse.

Blend the seasoning ingredients at high speed until everything is the consistency of a fine powder, including the peppercorns and the thyme and oregano leaves.  Put the seasoning into an old spice jar that comes with a top containing shaker holes.  This blend retains its freshness for at least a couple of months, but don’t make more than you’ll use much beyond that time as the complex fragrances will diminish over time.

About an hour before you’re ready to begin take the frozen chops out of the freezer.  You want the chops to still be frozen when you slice them, but not so hard as to make it difficult.  Place the chops on edge and slice in half, then slice the halves yet again resulting in four cutlet-style medallions.  Set the cutlets aside to fully defrost, about ten minutes or so.

While you’re waiting for the pork to defrost start heating a cast iron skillet on highest heat.  Don’t forget to turn on your exhaust fan!  This is going to get smoky.  You want that pan hotter than you’ve probably ever had it before.

Now go melt that butter.  While the butter is melting pound both sides of the pork cutlets with a tenderizer until they are very, very thin. 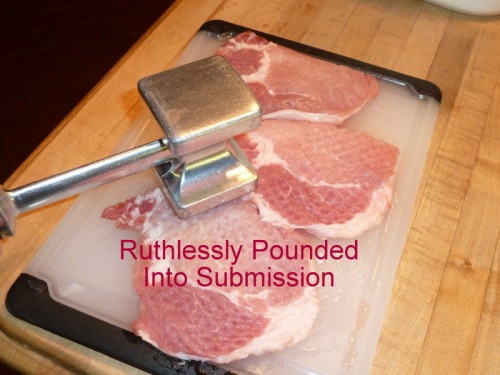 Pour melted butter onto the cutlets and smear the butter using the backside of a spoon.

Sprinkle liberal amounts of your fresh blackening seasoning.  Flip the cutlets over and repeat on the opposite side. 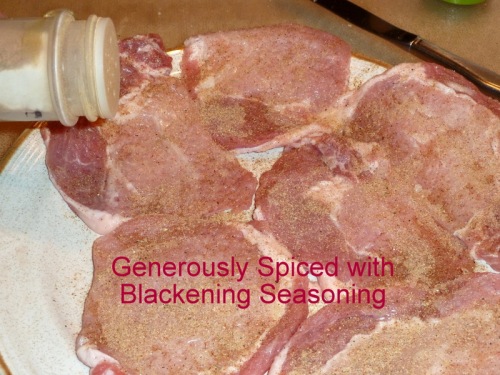 Is your skillet smoking hot?  I mean really smoking?  Can you feel the heat radiating off it from a foot or two away?  I mean really radiating?  If so, then you’re ready.  You might want to open the doors and windows now, too, because that exhaust fan is going to need all the help it can get.

Place some of the pork cutlets directly onto the sizzling hot skillet.  Don’t crowd the pan.  After no more than a couple of minutes check the underneath side of one.  If it’s nicely browned then flip the lot and brown on the opposite side.  Remove and keep warm as you repeat the process for the remaining cutlets. 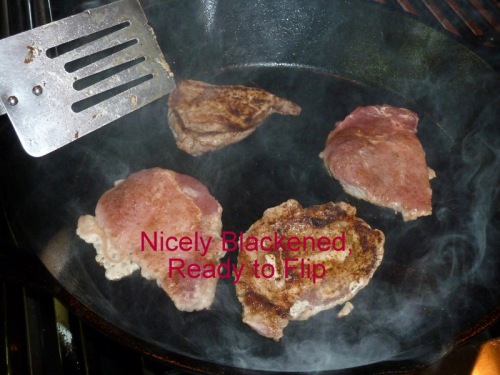 Blackened and Ready to Flip

Wine selection:  You can go a couple of ways with this mildly spicy dish.  My preference would be an Australian Shiraz to compliment the peppery flavor of the seasonings used.  You could however get by with a slightly sweet white such as a Gewürztraminer or perhaps even a Johannesburg Riesling.  If you wanted to cut the difference, I would probably go with a Pinot Noir or perhaps even a mildly sweet rosé.  I would definitely stay away from Bordeaux-style reds, oaked Chardonnays, or anything either too tannic or too hearty in flavor, although a good GSM or Châteauneuf-du-Pape just might hold up to these complex assortment of flavors.