Next week I begin another travel series — 54 days at sea on a trip that took us on two transatlantic crossings and a tour of both the Mediterranean and Black Seas. But for this week I’m returning to the subject that garners my highest audience, firearms.

It’s not often you come across a 36-year-old firearm in this condition. And according to the previous owner, the original Colt MK IV Series 70 has less than 100 rounds through it. 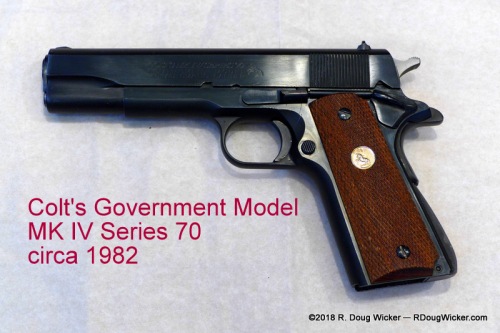 There are a few flaws in the original Colt satin blue finish, but I’d rate this pistol at around 98%. The wood grips also had some minor dings, as well, but also very minor. 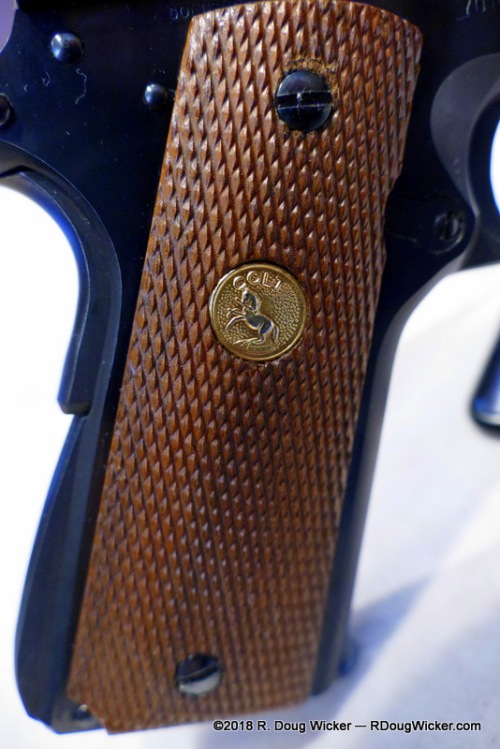 If you read my previous blog article on the new MK IV Series 70 (see: A Look at the Colt MK IV Series 70), then you know that the originals differed from the original in more than just the trigger. The original run from 1970 to 1983 also included a fingered “collet” bushing over a barrel with a widened muzzle end. This change was incorporated to improve the barrel-to-bushing fit in order to improve accuracy. 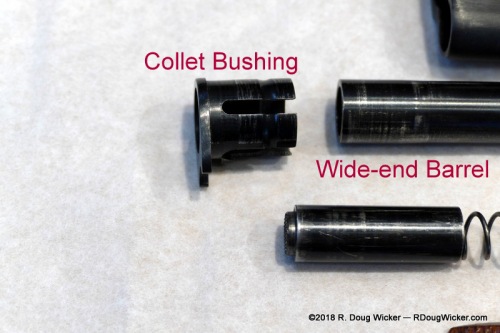 The collet bushing held over into the Series 80 line until the late 1980s, but reports of bushing failures led Colt to revert back to the solid bushing which carries over to the reintroduced Series 70 pistols of today. 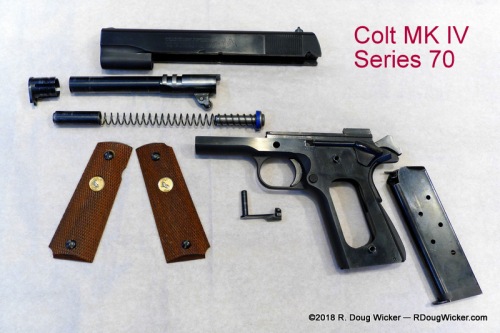 The example here has a 70B prefixed serial number. That places this 1911 at the very end of the original MK IV Series 70 run, as the 70B serial number began in 1981 and ran through the end of production in 1983. The rest of the serial number leads me to believe that the actual year of production was probably 1982. 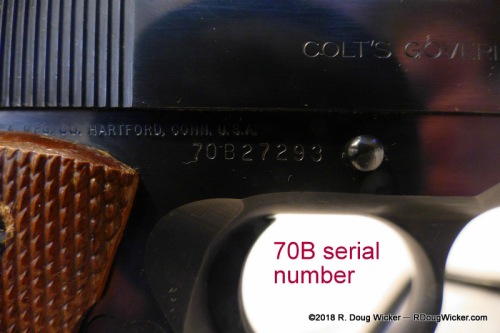 In my second article on the current Series 70 (see: Colt’s Series 70 Trigger Put to the Test — Series 70 vs. Series 80) I noted that the trigger was not all it was cracked up to be my Colt 1911 enthusiasts. I’ve since repeated my experiment (see video below) on side-by-side comparisons between probably half a dozen new Series 70 Colts and the current line of Series 80. Results were always the same. Out of the box, the current Colt Series 80 routinely beats the current Series 70 on every gun I’ve tried.

So, what about the original MK IV Series 70? Not so in this case. This truly the trigger I’ve seen praised. That’s not to say that the current Series 70 trigger is bad, as no Colt 1911/1991A1 trigger can be described as such from my experience, it’s just that the new Series 70 has more creep after take up and displays a degree of grittiness that simply doesn’t exist in any other Series 80 Colt I’ve tried. 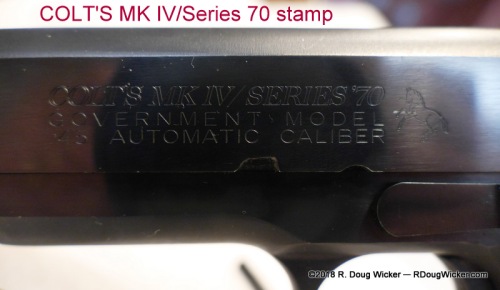 Sights on the original Series 70 match the current crop. They’re nothing about which to write home. I much prefer the three-dot sights Colt uses on the current Series 80.

Here’s a comparison between a new Series 70 and a Series 80 M1991A1 to illistrate what I mean:

Fortunately, both the original and previous owners of this pistol did something that far too few people do; they retained the original box and owner’s manual.

Here is this original Mk IV Series 70 posing with the box it came in:

But the box has definitely seen better days, and the Styrofoam insert inside was partially melted away from gun lubricant. Fortunately, that didn’t mar the finish on the pistol.

Comments Off on An original Colt MK IV Series 70

About a month ago I gave you a first look at the new .30-caliber M1 Carbine, 1945 version.  You can read that first look review here:

Seldom have I experienced as much anticipation in advance of test firing a weapon as with the new Inland.  I simply could not wait to get it out to the range, and I finally had an excuse when a friend asked me to instruct him in firearms handling following his first gun purchase.  So, I loaded up my two Beretta Cheetahs (Monday’s review), my Colt M1991A1 .38 Super +P (Wednesday’s review), and the recently acquired Inland M1 Carbine and headed to the indoor shooting range at my second favorite local gun store — Sportsman’s Elite.

I saved for last the firing of the Inland, and I was not disappointed.  This is, quite simply, one of the most fun centerfire rifles I’ve ever had the pleasure to shoot, coming in right alongside the fantastically fun Beretta CX4 9mm Carbine.

This is attention to detail

I took with me this day four 15-round magazines — the one that came with the rifle, two after-market Korean-made KCI magazines, and another Inland magazine.

I initially set the target out to 25 feet and ran the magazine that came with the Inland.  The rifle functioned flawlessly, and the aperture peep sight proved far too good for so short a range.  Recoil was incredibly mild, with the rifle experiencing negligible muzzle rise.  Target reaquisition was very rapid, and followup shots could be conducted on target in fractions of a second.  Try that with a 30.06 Garand!  It’s no wonder many G.I.s in WWII found creative ways to “lose” the M1 Garand when they came across the much lighter, faster to shoot, higher capacity M1 Carbine.

My friend ran the target out to fifty feet.  Same result — incredible accuracy with a free-standing, unbraced hand hold.  Groups for both of us measured under two inches even though neither of us were firing for accuracy and were more interested in function checking the weapon.  No adjustment was needed to achieve this on the fully adjustable rear sight.  This was out-of-the-box accuracy like you wouldn’t believe.

Now a word about magazines, and the one sour note on the range:  The included Inland magazine and the two KCI Korean magazines all functioned flawlessly.  The second post-purchase Inland did not.  Despite repeated attempts to chamber a round from the fully loaded Inland magazine, nothing worked.  I later read that another reviewer had a similar problem, but he had it narrowed down to a specific side.  He pin pointed the problem as occurring when a round was being chambered from the left side of the magazine, which just so happens to be the side upon which a cartridge sits in a fully loaded 15-round magazine.  I’m going to see if this happens when loading a cartridge from the right side . . . unless I can get Inland to exchange this magazine first.  Until then, watch out on magazines.  The KCI magazines from Korea ran flawlessly, whereas the Inland magazines were .500.  That’s an unacceptable batting average for a firearm. 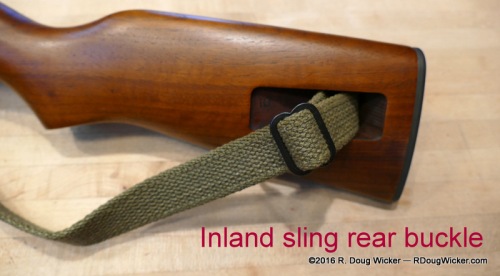 Trigger review:  The Inland trigger is stiff, but no more so than other personal defense carbines such as the Beretta CX4.  It’s more than adequate for the intended purpose, which is hitting your target inside 100 yards.  Indeed, the trigger did not adversely affect either of us in staying on target and inside the bulls-eye.  I suppose I could get it worked on and improved, but why bother?  The rifle is probably more accurate than I as is out to probably 150 to 200 yards, but that test will have to wait for an outdoor excursion.

My rating:  The new Inland M1 Carbine is a winner in nearly every regard.  It’s pricey, but in my view the price of admission ($1,079 MSRP; an even $1,000 through my local favorite gun store) is worth having a faithful reproduction of the original GM Inland M1 Carbine.  At 5.3 pounds, 15+1 rounds of .30 carbine (muzzle energy equivalent to .357 Magnum), in a compact, easy to maneuver package makes this a great rifle for everything from ranch to a home defense alternative. 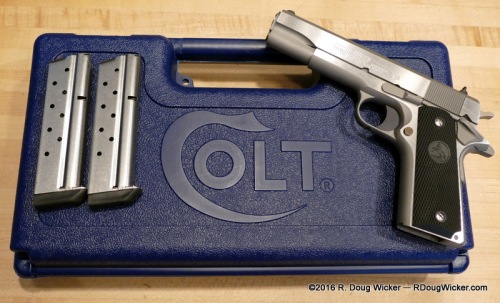 You may recall that I gave a first-look review of this intriguing weapon and caliber before.  I had no intentions of firing that weapon, and still don’t as it’s a pre-bankruptcy example of the venerable Colt M1911 design in a somewhat rare caliber.

What’s in the box

Fortunately I satisfied my itch to try the M1911 in .38 Super +P by acquiring a second copy.  As with the first copy, this one is also a Model 1991A1 in stainless, and outwardly it’s identical.  The only difference appears to be the included magazines, as the firing example came with rubberized footings screwed onto the bottoms.  See below for a comparison:

So, finally, I got around to firing this incredible combination — the classic Colt M1911 chambered in the powerfully exquisite .38 Super +P cartridge.  For an explanation on how this combination came about in 1929, and a brief history on the .38 Super +P cartridge, read my first-look review by clicking on the link below.  I’m sure you’ll find it both informative and entertaining.

Being the M1991A1, today’s Colt has the  Series 80 trigger.  For an explanation on that and a comparison with the Series 70 trigger go to these links:

And since I’ve covered the trigger on the Colt M1911 in those past articles, I won’t cover that again here today except to say that it’s what you’d expect from the M1911 design.  In a word — Superb. 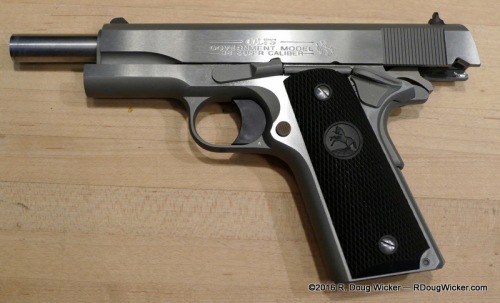 As I’ve stated previously in the above articles, the Colt M1911 was originally designed around the .45 ACP cartridge.  Only in 1929 — when law enforcement had trouble going up against Depression-era desperados in thick steel-bodied cars and wearing body armor impervious to the .45 — did Colt get around to putting a bit more oomph through the Colt M1911.  That resulted in what is basically the forerunner to the Magnum load — the .38 Super +P, which would for six years reign as the most powerful handgun cartridge until the advent of the .357 Magnum revolver in 1935.  The .38 Super +P still beats the .40 SW, and even compares favorably with most commercial loads of the .357 SIG.

Considering the increased muzzle energy and higher velocity of the lighter .38 Super +P round, one would expect more recoil over an M1911 chambered in .45 ACP.  In actual practice it turns out just the opposite.  M1911 recoil with the much slower, quite heavy .45 ACP is very controllable, but it does have a “push” to it that gives some muzzle rise.  I refer to this recoil as a “push” because that’s the best way to describe what you feel.  If you read my article on firing the .45 ACP M1991A1 at the link below, you’ll find this description:

“In my opinion the 9mm has a sharper, quicker recoil whereas the .45 ACP imparts a steady, even, thrust-like reaction.  Recoil management is thus easy to accomplish and target reacquisition is very quick.”

If anything, the .38 Super +P feels more like the recoil one experiences when firing a standard locked-breech 9mm Parabellum when shot from a SIG P229.  The recoil impulse feels quicker than with an M1911 firing a .45 ACP, but the muzzle rise seems less and reacquisition on target is about the same.  There is one difference, however.  That’s in muzzle flash.  I shot this M1991A1 .38 Super at an indoor range with somewhat dim lighting.  The flash was . . . impressive.  Not .357 Magnum-out-of-a-two-inch-barrel impressive, but you’ll definitely notice a flash coming out of the muzzle.

My impressions after firing the .38 Super +P is that this is probably my new favorite handgun shooting round, and the M1991A1 in stainless is now my new favorite hiking piece except in brown bear country.  For that I’ll rely upon bear spray and shop around for something even more powerful as a backup to the spray, perhaps a Smith & Wesson .500 revolver with ported barrel.

Yep, the Colt M1991A1 is simply that fun to shoot.  This is also an incredibly accurate combination in an very controllable package.