We arrived into our next destination the day after leaving Geraldton.  So, Radiance of the Seas made port on February 25 in Fremantle, affectionately called ‘Freo’ by the local, which would also grant us access for that day into nearby Perth.

This would be a busy day for Ursula and I. We had much to see and do, and only one full day in which to do it all. So off we went with our tour, and the first stop of a very long day found us at the Fremantle War Memorial atop Monument Hill. The main monument here stands 141 feet/43 meters tall, and it is dedicated to those from Fremantle who lost their lives in World War I. Each facing on the monument recalls a different major battle, including Palestine, Flanders (Battle of Messines), and Galipoli.

On Monument Hill are various other smaller dedications, including this mounted 21-inch/53cm torpedo dedicated to the memory of U.S. Navy submariners who perished during World War II while serving in the Silent Service: 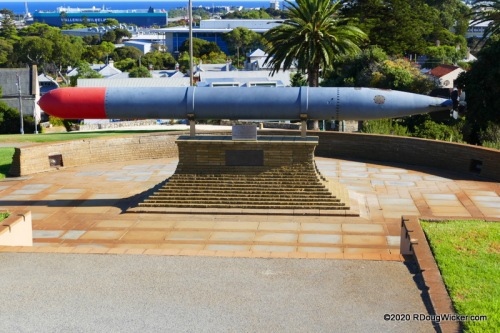 We then headed into Esplanade Park and Fremantle Fishing Boat Harbour, which was good for the lead picture above as well as this rather impressively large Cicerello’s Fish ‘N’ Chips, which has been in business since 1903:

Just a few hundred feet away was an interesting building, which houses the WA Shipwreck Museum: 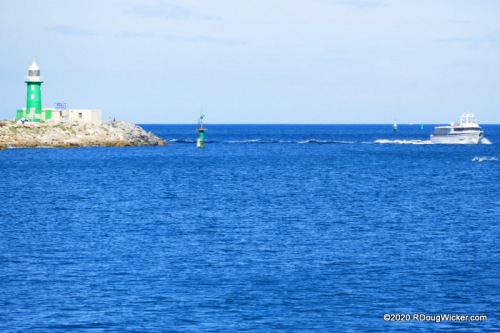 But we weren’t here to see lighthouses. Our tour guide brought us here for the WA Maritime Museum, more of which you’ll see on Wednesday. Outside the museum is this statue dedicated to new arrivals who immigrated through the Fremantle Harbour:

Australians whose ancestors arrived here can even look up family names on the plaques outside the museum:

WA Maritime Museum — Names of immigrants who arrived to Fremantle

Comments Off on Circumnavigating Australia — Arriving into Fremantle; War Memorial