On October 15, 2019 Adventure of the Seas sailed into the Bay of Fundy and made port in the city of Saint John, New Brunswick. Here we caught up with a really great tour guide — Diane Howarth of Go Fundy Tours: 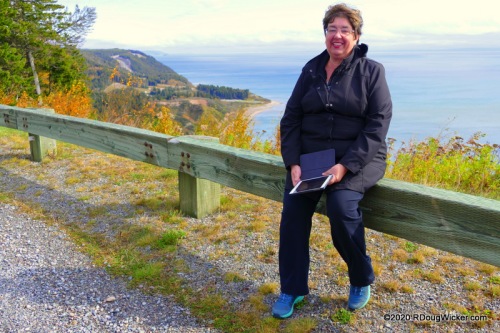 First stop, not even outside Saint John yet, was to view the famous Reversing Falls rapids on the Saint John River. Before we get to the Reversing Falls, however, let’s talk a moment about Diane and Go Fundy Tours. Go Fundy Tours is owned by Diane and her husband, so it’s a family affair. This tour was simply magnificent, and one of the best of the entire trip. We wound up visiting several places twice that day, several hours apart. That might sound redundant until you realize that the Bay of Fundy is subject to huge water level swings between high and low tides. This means that the landscape changes dramatically throughout the day.

One of these changing landscapes is the Saint John River, and the difference between high and low tides causes the rapids here to reverse course, peaking about every six hours, twelve and a half minutes. The pictures you see under cloudy skies were taken at about 7:15 a.m.

During this time it was low tide, and the water was flowing dramatically into the Bay of Fundy: 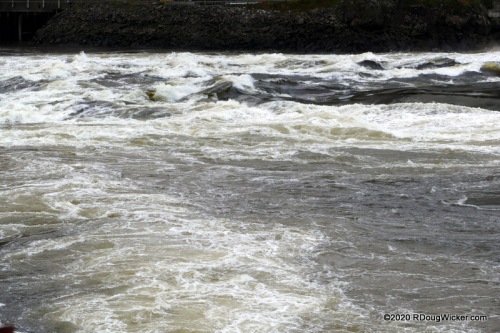 In most places around the globe (not to be confused with that exciting mystery novel The Globe), the average swing between high and low tides is 3 feet 3 inches/1 meter. Because of tidal resonance from the funneling effect of the Bay of Fundy, however, here the average is 43 feet/13 meters!

To show you the difference, here’s the same area photographed just four hours later, as high tide was starting to flow into the river:

But a short one-minute video is probably a bit more dramatic, so:

One last look before heading off to our next Go Fundy Tours stop with Diane Howarth: