Temple of Castor and Pollux (right), Temple of Vesta

The Roman Forum is far from the only attraction in this beautiful city. Here is the Trevi Fountain built in 1762, and featured in the 1954 romantic comedy Three Coins in the Fountain:

The Pantheon is believed to have been completed in 125 AD during the reign of Hadrian. Originally designed as a Roman Temple, the Pantheon became a Christian church in 609. Here are some photographs of the interior:

Overlooking the Roman Forum is the Santi Luca e Martina Church. The original structure was built in 625 AD, but its iconic dome was added over a thousand years later: 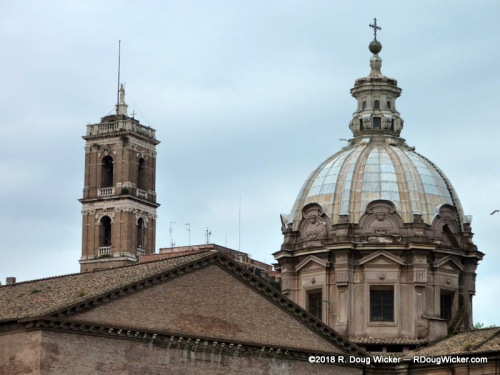 Another nearby domed church, this one beside the Rione i Monti, is the Santissimo Nome di Maria al Foro Traiano. Here you can see the church with Trajan’s Column in the foreground and the dome of Santa Maria di Loreto to the left:

Now for some more photos of the Roman Forum and the Colosseum: 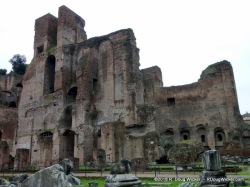