Sparky’s Burgers, BBQ, and Shakes really is rapidly becoming world famous, so that’s not hype you see above the entryway and the long line waiting to get inside. And while Sparky may be famous for their award-winning green chile cheeseburger, it’s the barbecue that keeps Ursula and me returning even though Sparky’s is 160 miles round trip! And if you thought the outside decor was on the kitschy side, wait until you step indoors:

Sparky’s has grown over the years to the point that it has taken over the entire frontage of the building. The entryway takes you to the cash register and kitchen, where you place your order. You then walk past the souvenir stand and into the first of two huge dining areas. The second dining area has some really hokey 1930 and ’40s honkey-tonk/western musicians, and they do have a tendency to sing off-key, so we try to keep to the first dining area. Which reminds me of a joke:

A gentleman stepped up to the bar and ordered a drink. He turned to the rancher standing next to him and said, “I’m going to put some money in the jukebox. What kind of music do you like?

The rancher said in a slow drawl, “Why, mister, I like both kinds of music.”

“Both kinds?” the gentleman asked. 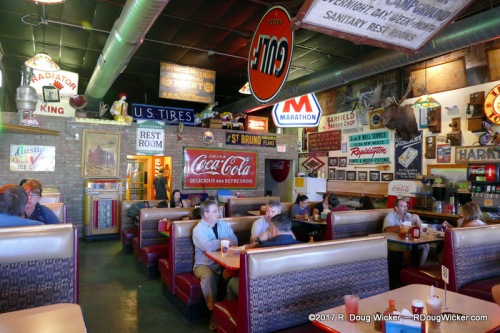 Sparky’s is such a hit that it’s only open four days a week—Thursday through Sunday from 10:30 a.m. until 7:00 p.m. So don’t even think of driving through Hatch on a Monday, Tuesday, or Wednesday! You can also give up all hope of sampling this place on New Year’s Day, after 3:00 p.m. on Super Bowl Sunday, Easter Sunday, Thanksgiving and Black Friday, and Christmas Day.

Sparky’s menu may appear basic, but the food isn’t. Here are our drinks, a freshly squeezed blueberry lemonade and a guajillo chile and mango shake:

Did I mention that Sparky’s has an award-winning green chile cheeseburger? Here it is, complete with true Hatch green chile and a side of incredible beans:

That burger is even better than it looks, beating out in my opinion even the famous Owl Café and the Buckhorn Tavern. Both Owl Café and Buckhorn are situated in San Antonio, New Mexico, just south of Socorro. You may remember Bobby Olguin of Buckhorn Tavern. He’s the guy Bobby Flay made the mistake of challenging to a green chile cheeseburger throwdown. Mr. Flay lost. Mr. Olguin’s business has been a gold mine ever since with long lines to get in. And having tasted both, Sparky’s is still better in the green chile cheeseburger category . . . but not by much! You owe it to yourself to try both, on different days of course!

However, I’m here to tell you  that the green chile cheeseburger isn’t even the best item in this place. Sparky’s barbecue is.

The Peoples’ Choice platter gives you a sampling of smoked sausage (a tad on the salty side); a succulent smoked rib; some of the best smoked brisket you’ll ever taste short of my own; and some of the best slow-smoked pulled pork you’ll ever eat except maybe for this recipe. Another great side here is the cole slaw with pineapple chunks. Go to Sparky’s with a friend. That way one can get the beans and the other the slaw, then go halvsies.

Sparky’s deserts are also very good, including their delightful fruit pie, but we’re going elsewhere for dessert in a moment. So, let’s say goodbye to Sparky’s: 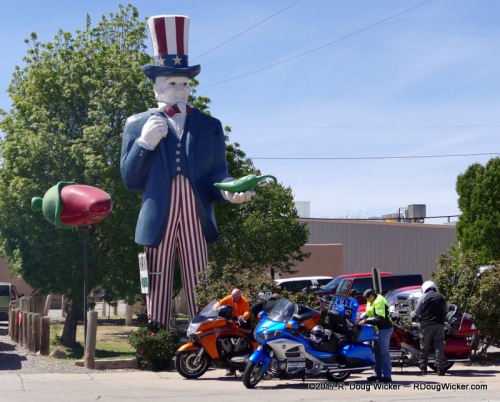 And head south along NM-185, past Radium Springs, and into Las Cruces, New Mexico. Here we stop at Caliche’s Frozen Custard for some of the best ice cream you’ll find this side of a New Jersey frozen custard stand:

Be ready for a long line here, as well. It’s that good! 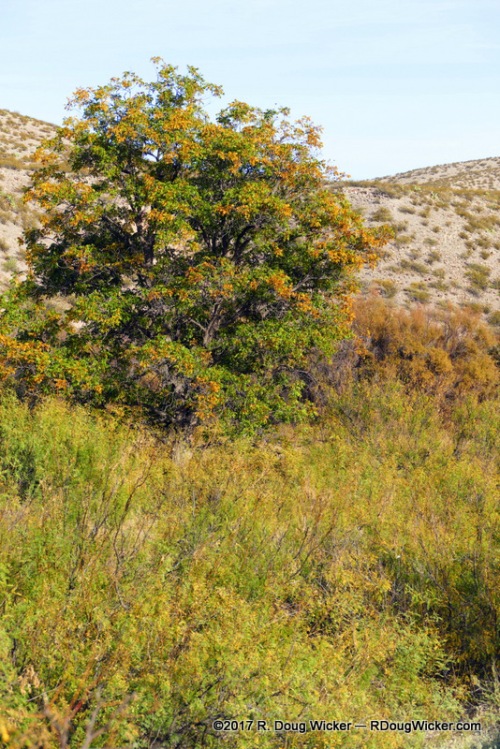 The Hatch Valley holds exquisite scenery any time of year, but there’s just something about fall colors here along the banks of the Rio Grande in the midst of chile fields, cattle ranches, and horse farms. Unfortunately, invasive salt cedar has infiltrated here, but even salt cedar affords some great color this time of year. 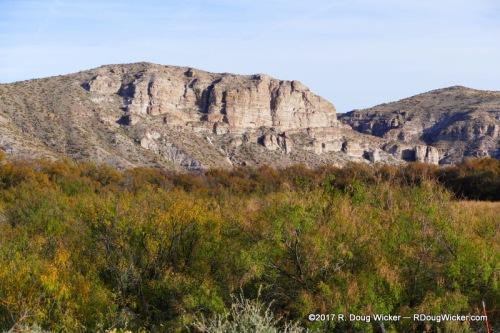 However, we’re in a rush to get to lunch, so I’ll spare the words and post a few more scenic shots for a moment: 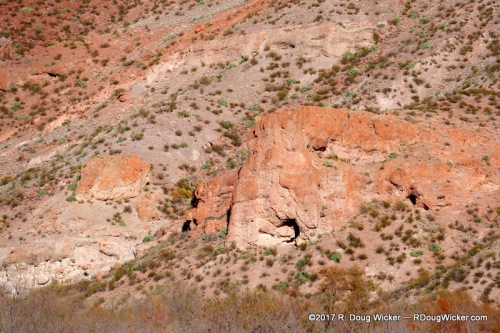 Now on to the important stuff—Hatch’s hidden gem, Sparky’s Burgers, BBQ, and Shakes:

On Friday we’ll head inside for a review of the food, but for now we’re going to look at the kitschy collection of 1950s roadside nostalgia straight out of the heyday of Route 66. Here you’ll find everyone from Robin Hood to Colonel Sanders to Yogi Bear: 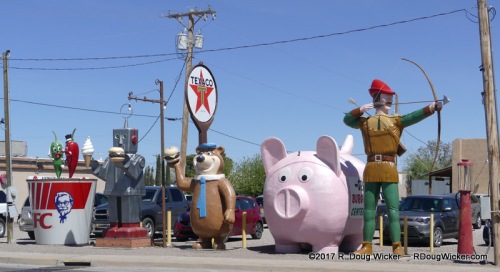 Even Sparky is present here:

Sparky posing with one of his burger creations

Here are some closeups of this eclectic sampling of roadside Americana:

Spicing up a bucket 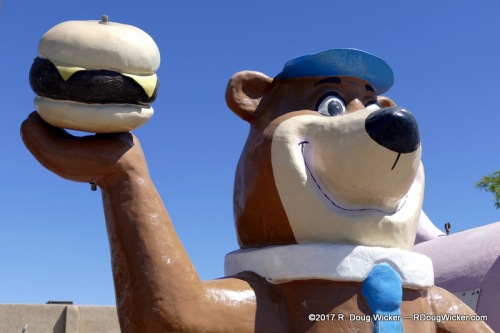 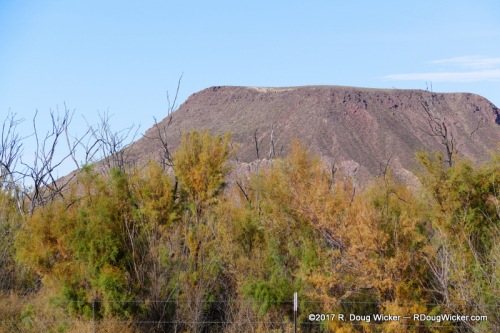 Along the Rio Grande

One of our favorite weekend day trips is along the back roads between El Paso and Hatch, New Mexico. It’s scenic. It’s historic. It’s delicious. Deliciously spicy, that is. Hatch is home of the world famous Hatch chile. And what is Hatch’s green chile good for? Glad you asked. A while back I posted my chile rellano recipe using poblano chiles, but Hatch green really makes that recipe shine. And let’s not forget that modern culinary miracle, the green chile cheeseburgers. You’ll see one of the best of those on this week’s Fun Food Friday.

By the way, did you know that Clint Eastwood was once lynched here in the Hatch Valley? That occurred along the banks of the Rio Grande not far from where these photos were taken, very close to Fort Selden (topic of a future blog article). The year was 1968, and poor Clint was mistaken for a murderer by a posse that included, of all people, kindly Skipper from Gilligan’s Island (Alan Hale, Jr.) in the movie was Hang ‘Em High.

But to heck with Clint Eastwood. This is chile country! And lunch is right up the road! 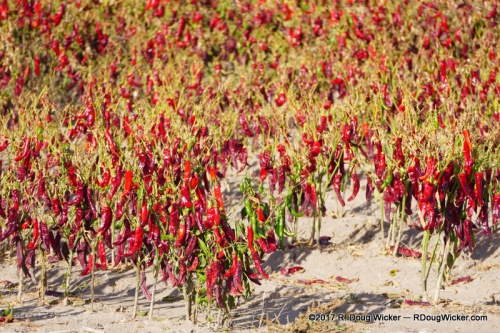 Another great feature of this recent road trip is that the foliage was just beginning to succumb to fall.

We’ll continue with narrative on Wednesday, but for now I’ll leave you with some more sights from this drive through the country:

Along the Rio Grande