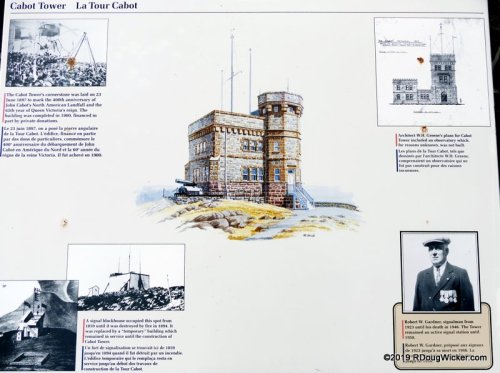 Our tour van made a rather long trek up Signal Hill overlooking St. John’s, Newfoundland, with several stops along the climb. One of these stops was at the Johnson Geo Centre, from which there were some great views of St. John’s and the Basilica of St. John the Baptist: 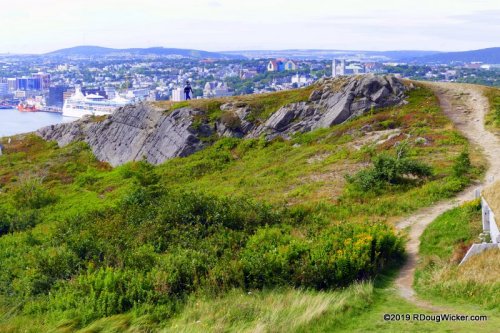 View of St. John’s from near Johnson Geo Centre

View of Basilica of St. John from near Johnson Geo Centre

At the crest of Signal Hill you’ll find Cabot Tower.

And as we trekked up the hill from the parking lot, we came across this little fellow, one of two dog breeds associated with this area:

If you thought the views from the Johnson Geo Centre farther down the hill was good, take a look at this image of the Fort Amherst Lighthouse, which includes the former fort’s gun emplacements and pillboxes:

But let’s get back to that magnificent Cabot Tower. This impressive stone structure was completed in 1900, and it was built to commemorate both Queen Victoria’s Diamond Jubilee and the 400th anniversary of John Cabot’s  discovery of Newfoundland.

It is here at Cabot Tower that a momentous event occurred in 1901. Sending aloft by kite a 500-foot antenna cable, the company owned by Guglielmo Marconi purportedly managed to receive the first transatlantic radio signal. This signal originated from the Marconi Wireless Station in Poldhu, Cornwall some 2,200 miles/3,500 kilometers distant. The message was a simple Morse Coded letter ‘S’.