You may recall that I gave a first-look review of this intriguing weapon and caliber before.  I had no intentions of firing that weapon, and still don’t as it’s a pre-bankruptcy example of the venerable Colt M1911 design in a somewhat rare caliber. 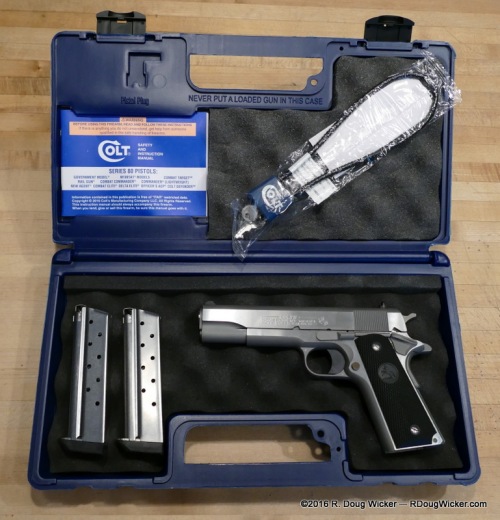 What’s in the box

Fortunately I satisfied my itch to try the M1911 in .38 Super +P by acquiring a second copy.  As with the first copy, this one is also a Model 1991A1 in stainless, and outwardly it’s identical.  The only difference appears to be the included magazines, as the firing example came with rubberized footings screwed onto the bottoms.  See below for a comparison: 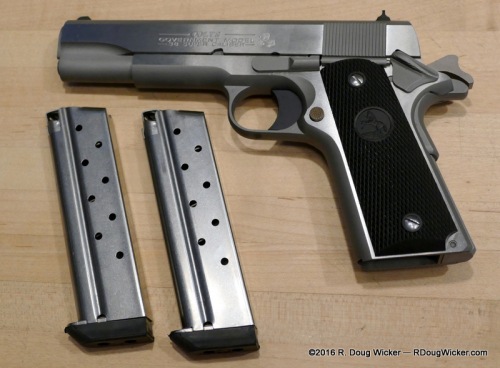 So, finally, I got around to firing this incredible combination — the classic Colt M1911 chambered in the powerfully exquisite .38 Super +P cartridge.  For an explanation on how this combination came about in 1929, and a brief history on the .38 Super +P cartridge, read my first-look review by clicking on the link below.  I’m sure you’ll find it both informative and entertaining.

Being the M1991A1, today’s Colt has the  Series 80 trigger.  For an explanation on that and a comparison with the Series 70 trigger go to these links:

And since I’ve covered the trigger on the Colt M1911 in those past articles, I won’t cover that again here today except to say that it’s what you’d expect from the M1911 design.  In a word — Superb.

As I’ve stated previously in the above articles, the Colt M1911 was originally designed around the .45 ACP cartridge.  Only in 1929 — when law enforcement had trouble going up against Depression-era desperados in thick steel-bodied cars and wearing body armor impervious to the .45 — did Colt get around to putting a bit more oomph through the Colt M1911.  That resulted in what is basically the forerunner to the Magnum load — the .38 Super +P, which would for six years reign as the most powerful handgun cartridge until the advent of the .357 Magnum revolver in 1935.  The .38 Super +P still beats the .40 SW, and even compares favorably with most commercial loads of the .357 SIG. 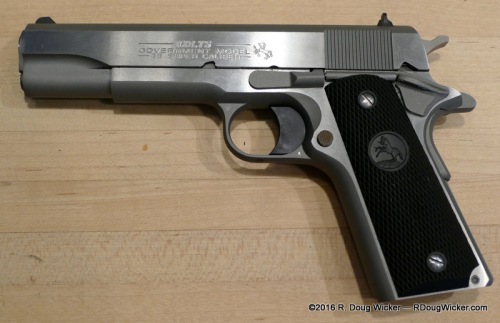 Considering the increased muzzle energy and higher velocity of the lighter .38 Super +P round, one would expect more recoil over an M1911 chambered in .45 ACP.  In actual practice it turns out just the opposite.  M1911 recoil with the much slower, quite heavy .45 ACP is very controllable, but it does have a “push” to it that gives some muzzle rise.  I refer to this recoil as a “push” because that’s the best way to describe what you feel.  If you read my article on firing the .45 ACP M1991A1 at the link below, you’ll find this description:

“In my opinion the 9mm has a sharper, quicker recoil whereas the .45 ACP imparts a steady, even, thrust-like reaction.  Recoil management is thus easy to accomplish and target reacquisition is very quick.”

If anything, the .38 Super +P feels more like the recoil one experiences when firing a standard locked-breech 9mm Parabellum when shot from a SIG P229.  The recoil impulse feels quicker than with an M1911 firing a .45 ACP, but the muzzle rise seems less and reacquisition on target is about the same.  There is one difference, however.  That’s in muzzle flash.  I shot this M1991A1 .38 Super at an indoor range with somewhat dim lighting.  The flash was . . . impressive.  Not .357 Magnum-out-of-a-two-inch-barrel impressive, but you’ll definitely notice a flash coming out of the muzzle.

My impressions after firing the .38 Super +P is that this is probably my new favorite handgun shooting round, and the M1991A1 in stainless is now my new favorite hiking piece except in brown bear country.  For that I’ll rely upon bear spray and shop around for something even more powerful as a backup to the spray, perhaps a Smith & Wesson .500 revolver with ported barrel. 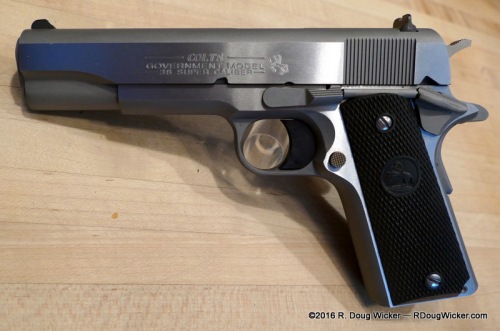 Yep, the Colt M1991A1 is simply that fun to shoot.  This is also an incredibly accurate combination in an very controllable package.