A Rare Find — Walther PP .32 ACP Made in Post-War Germany

Because of the popularity of a certain fictional English spy, many people in the U.S. are familiar with the German Walther PPK — a very compact, highly concealable handgun originally designed around the .32 ACP (7.65mm) cartridge.  What is lesser known is that the PPK, originally produced in 1931, was in turn a redesigned, more compact version of the 1929 Walther PP, and that the Walther PP was one of the most popular police weapons ever produced.  Indeed, only recently have some national police departments discontinued their use and, yes, believe it or not Wikipedia still lists the PPK variant as being in service at MI6.

A third variant, the PPK/S, mates the larger PP frame to the smaller PPK slide and barrel, and has been exceedingly popular in this country since its inception in 1968 (in response to the ill-conceived and poorly written Gun Control Act of that year).  It is still produced to this day by Smith & Wesson in both .32 ACP and .380 ACP (9mm kurz).

After World War II until 1986, all .32 ACP and .380 ACP Walther-authorized European-made PP-series pistols were produced by Manurhin of France.  That includes even those Walthers with West German proof marks.  Walthers displaying West German proofs were in fact shipped from Manurhin to Ulm for final assembly and testing.  Only from 1986 onward, until the late 1990s, were Walther PP-series pistols once again made in Germany — at Walther’s manufacturing facility in Ulm.  (see:  Fun Photo Friday — 1940 Zella-Mehlis Walther PP for an earlier all-German Walther PP)

That means that most post-war PP-series pistols in the U.S. were either made in the U.S., first by Ranger Manufacturing for the now-defunct Interarms Company and later by S&W, or are of either German or French manufacture.  Other variants exist (many being illegal copies, especially from the former Soviet Block countries), but those are exceedingly rare here.  As for pre-war versions, those are all exclusively from Germany, and many were brought to the U.S. by returning servicemen or imported by Sam Cumming’s International Armament Corporation (Interarmco, and later Interarms) before he acquired the rights to manufacture here in the U.S. under the Walther banner the PPK and PPK/S versions.

On a side note — Sam Cummings was quite a character, and it’s reputed that his Interarms was initially a front company for the CIA.  Sam Cummings (more on him here) was the inspiration for the character of Sterling Heyward (and his father) in my murder mystery The Globe, and Interarms was the basis for the fictional InterGlobal Armaments mentioned in the same book.

So, why am I bringing up this firearms history lesson?  Blame Saturday, and blame my favorite local gun store.

Post-war PPK and PPK/S pistols may be found practically everywhere in the U.S. (mostly of U.S. manufacture).  The post-war PP is a bit more of a challenge, as none were produced in this country.  Finding a true, post-war, West German-manufactured Walther PP is flat-out difficult.  Finding one without any import markings is even harder.  Finding one in .32 ACP (never a very popular round in the U.S. where caliber is king and .380 ACP is deemed by many to be the minimum cartridge suitable for a defensive round) is indeed rare.  Finding one in near pristine condition is practically impossible.  Finding one at an affordable price . . . well, forget it.  Or so I thought.

Here’s what my good friends at El Paso’s Collectors Gun Exchange were dying to show me the moment I walked into the store: 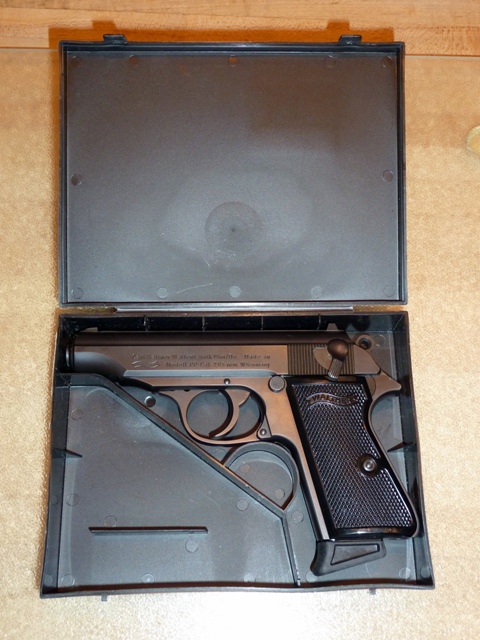 How good a deal was it?  I snagged this remarkable example for less than the suggested retail price of a new S&W PPK or PPK/S. 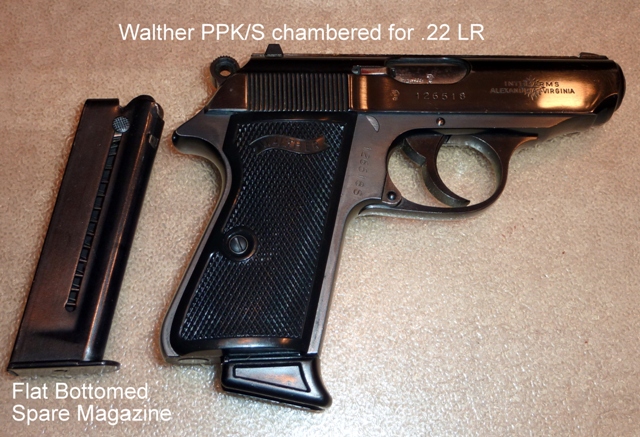 And now a mystery:  The Berlin Wall came tumbling down in early November, 1989.  The reunification of Germany became official on October 3 the following year.  So, why does a Walther made in 1992 bear the mark “W. Germany” on the slide?