The Desert Southwest is home to many intriguing aircraft.  The primary reason is corrosion.  Things don’t rust in dry climates.  El Paso, for instance, receives on average a little over eight inches of precipitation a year.  Tucson, home of the Pima Air & Space Museum, get just over twelve inches.  Not coincidentally,  Davis-Monthan Air Force Base in Tucson (where I worked as an air traffic controller in the late ’70s and early ’80s) hosts the 309th Aerospace Maintenance and Regeneration Group, commonly referred to by all branches of the military as “The Boneyard.”

At El Paso International Airport you’ll an interesting aircraft or two hanging about.  Indeed, up until just a very few years ago, El Paso had sitting on the ramp the world’s last remaining flyable Convair 990 (which, unfortunately, was cut up and sold for scrap).  Another aircraft — the sole one-of-a-kind example — will be featured here next week in a rather unique aircraft identification contest.  You’ll also find at El Paso International a flying F-100 Super Sabre (the world’s first production aircraft capable of reaching supersonic speeds in level flight) and, currently undergoing restoration to flying status, an F-106 Delta Dart.

You’ll find one other very unique aerial vehicle residing in El Paso’s dry climate — NASA’s last remaining operational Super Guppy.  NASA’s Super Guppy fleet were critical to the Apollo program and the race to the Moon.  No other aircraft in the world was at that time capable of flying the oversize rocket modules and other hardware to the Kennedy Space Center.  Indeed, the Super Guppy still to this day carries payloads far too bulky for even the C-5 or the newer C-17 giant cargo aircraft.

I managed to finagle entry into this unique piece of aviation history.  Today, you get the benefit.  Here is a visual tour of for you to enjoy: 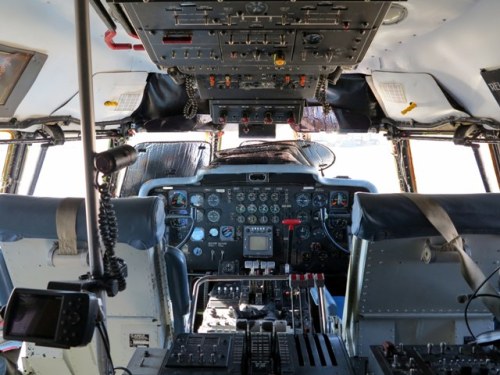 The cockpit remains much the same from the KC-97 days