If Edgar Allan Poe Had Written A Christmas Carol (Humor)

Now time for a repeat of a little Christmas humor (tune in tomorrow for the sequel on the subsequent murder investigation, written in the style of Mickey Spillane):

Once upon a snowstorm dreary, through which I trudged all weak and weary,
Past many a quaint and curious number of advertisement lore
I saw the ad, above some wrapping; on the door I started tapping
At first it was a gentle tapping, tapping at the storefront door
I must gain entry to this store, as there was nothing then I wanted more

Searching for this and nothing more

The toy was here for which I search, leaving me in quite a lurch
Having waited far too long to shop for “The Super Fly-A-Saur”
Eagerly I watched the clerk, beckoning me not to shirk
I quickly entered, nearly berserk; “I must have it,” I said with a smirk
“Where, oh where, be that damned flying dinosaur?”

Quoth the clerk, “The second floor”

Up the escalator I ran, fighting against its downward span
I cursed its descending stairs as I glanced to the ascending flight before
Casually the clerk began her ascent, chuckling at my predicament
“I fear, sir, you shall be spent, before you reach the next department”
I ran, and ran, for far too long, fighting against this tiresome chore

Vowing “Not up the down escalator evermore”

I stopped, bent over double, breathing hard for all my trouble
Crying out with all my might, “Where is this cursed Fly-A-Saur?”
She smiled that stupid service smile, the one that sends me shaking
“Tis over here,” she said, “Right behind that great big door”
“Tis over there, I swear, or my name is not Lenore

“Tis what you seek and nothing more”

I pushed the double doors apart, what I saw gave me a start
“There’s nothing here, I’ve been tricked, where is this hellish dinosaur?”
She smirked again, mocking me, sending me quaking
I felt rage in the making, “Tis right there,” said this shrewish bore
“You see, we’re all out at this store; here’s your rain check, nothing more”

Thus I strangled the fair Lenore

Wishing Everyone a Great Thanksgiving Celebration

Visit with friends,
And family, too
Keep discussions calm
And take this cue:

When Uncle Bill
Brings up Trump
Pass the ‘tatoes
Say, “Don’t be a chump” 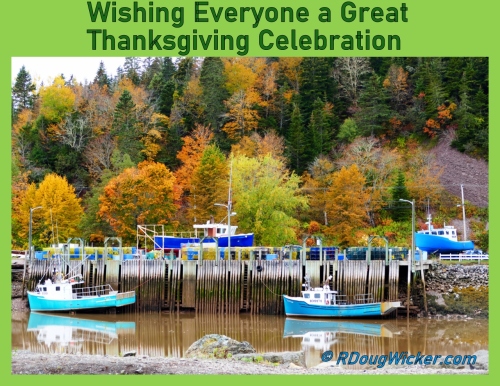 Comments Off on Wishing Everyone a Great Thanksgiving Celebration

Indentured Servitude is STILL alive and well in the U.S.

Back in October of 2013 I posted my most read blog article . . . by far. It garnered an astounding 7,368 views. And now, unfortunately, that article becomes timely once again. Only, this time, substitute President Donald J. Trump for any references that were previously made about Senator Ted Cruz (another absolutely despicable human being). And this time the hissy fit isn’t Obamacare. This time it is over a wall that nearly everyone acknowledges will neither add anything to national security, nor mitigate crossings along our border with Mexico, all at a cost that would eventually exceed $40 billion if completed along our entire southern flank. Besides, the president has had two years now to make Mexico pay for that wall, right?

And here is that reprinted article:

Take it from a former controller who has in his 34 years in the business worked at some pretty busy facilities under less than ideal conditions with obsolete or failing equipment and uncooperative weather:  There are few if any jobs more stressful than air traffic control.  Period.  It’s certainly more stressful than being, say, a congressman or a senator.

Imagine working New York TRACON (Terminal Radar Approach Control) during a busy inbound rush of air carriers, failing equipment, and a line of thunderstorms pushing into the area from the west.  Throw into that mix an inflight emergency or two and perhaps an aircraft with minimum fuel that needs to get on the ground right now.

Then let’s add to all that stress.

Let’s tell those controllers that they have to go to work, but a group of about thirty congressmen and a senator or two who didn’t agree with the results of the last election are going to refuse to allow the United States Congress to pay them.

These already overworked, stressed controllers have mortgages to make, utilities to pay, car payments, grocery bills, kids in college . . . but none of that makes any difference.  They are required by federal law to work.  For free.  Indefinitely.

Think that’s fair?  That’s what’s happening right now, this very second.  In New York.  In Dallas.  In Atlanta.  In Chicago.  In Los Angeles.  In myriad other busy facilities across this great nation.  All because of thirty-some-odd Congressmen and at least one delusional, grand-standing Senator from Texas who has ambitions beyond the senate seat he’s held for less than ten months.

Tomorrow, these controllers will be paid for only 48 of the 80 or more hours they worked — the 48 hours they worked before the shutdown that occurred just thirteen days ago.  Those controllers received that bad news when they got their “pay” statements last Thursday.  Two weeks from tomorrow the amount in their paychecks drops to Z-E-R-O despite working another 80 or more hours during the next pay period.

How long do you think you could financially hold on under such conditions?  How long do you think it’ll be before some of these controllers have to resign to find jobs that pay the bills?  How long do you think it’ll be before retirement-eligible controllers with 20 or 25+ years of badly needed experience and who are currently mentoring an already far-too-young and inexperienced group of new controllers decide that they should go into retirement just to pay the bills?  (Controllers, by the way, are only allowed to work to the last day of the month in which they turn 56 because of the stresses inherent to their jobs, and because before that reduction in the retirement age, very few controllers could make it to mandatory retirement because of failing health and deteriorating abilities and reaction times.  These are the professionals who your congressman is stiffing on pay for work they’ve already done.)

How long before that radar control room guiding your airliner is staffed like this?:

The Control Room of a Terminal Radar Approach Control (TRACON)

And while these people are working for free, I’d like for you to consider this:  Those congressmen?  The ones who before the last election proclaimed the 2012 elections a “referendum on Obamacare?”  The congressmen who are now having a temper tantrum because, at their core, they apparently only believe in democracy when it suits them?

Those congressmen work on average just two days out of every five-day workweek, earn at a minimum $174,000 a year (Speaker Boehner gets a whopping $223,500 for not doing his job), are vested for retirement benefits after only five years on what I laughingly call “the job,” get federally subsidized healthcare (which those thirty want to deny people who make one tenth as much as they), and they continue to receive those pay and all those benefits while your air traffic controllers are forced to do without.  Those congressmen certainly aren’t hurting financially during this self-induced “crisis,” but your air traffic controllers certainly are.

It is way past time to start reducing the stress levels of your already overstressed air traffic controllers, and to start raising the stress levels of your elected representative.  And if you live in the state of Texas, as do I, it’s way past time to tell the wealthy Senator Ted Cruz (55th wealthiest member of the U.S. Senate) that if he doesn’t agree with democracy, then it’s well beyond time to democratically terminate his employment come next election.

These people, quite frankly, disgust this former Republican who, effective October 1 of this year, no longer affiliates himself with what once was truly the Grand Old Party . . . but is no more.