Book Review — Outside Looking In: High-functioning autism from one mother’s perspective


In August a fellow author asked me to beta-read and review her book. I was a bit hesitant, as the subject matter was something that normally would not interest me. Well, I’m glad I consented to the review, which you’ll see in just a moment. What I will tell you is this — if you have in your circle someone who is searching for information on raising a child on the autism spectrum, this is the book you need to recommend.

The book is Outside Looking In: High-functioning autism from one mother’s perspective, and it was a finalist for the Parenting & Family category of the 2020 Best Book Awards sponsored by American Book Fest.

Alas, Vivian’s book did not win, but the mere fact that it was one of the seven finalists to make the cut is indeed impressive. So, without further ado, here is my review of this delightfully wonderful read:

REVIEW:
Outside Looking In: High-functioning autism from one mother’s perspective
by
Vivian M. Lumbard

Outside Looking In is an entertaining and very enlightening look into raising a child with autism. This book belongs in the collection of anyone in the educational system, as it provides in exquisite detail the aspects of accommodating the needs of an autistic student. At the very least, a copy should find its way into every teachers’ lounge and school library in the country.

But while educators will find much meaningful information in this book, the target audience will gain even more. Outside Looking In contains myriad tales of life with an autistic child beginning from before the first correct diagnoses through adolescence and into preparation for college and beyond. If you know someone raising a child with this condition, you simply must consider steering them toward a copy. The style of writing is at times fun, occasionally humorous, frequently insightful, always informative, and never dull. The charming family anecdotes sprinkled throughout provide wonderful incentive to propel the reader forward into tackling this sometimes-difficult topic. I learned more about autism from this single source than I have reading countless articles over the course of my lifetime.

As a bonus, the back-of-book material cites many resources for additional information for anyone wanting to learn more on this subject, or for any family who finds themselves raising a child diagnosed anywhere within the autistic spectrum.

Comments Off on Book Review — Outside Looking In: High-functioning autism from one mother’s perspective

The World, inspiration for The Globe, is removed from service

As many of you may know, the world’s largest private ownership residential cruise ship MS The World was the inspiration for my murder mystery The Globe. Yesterday MS The World was removed from service, her residents disembarked, and her crew reduced to bare minimum. 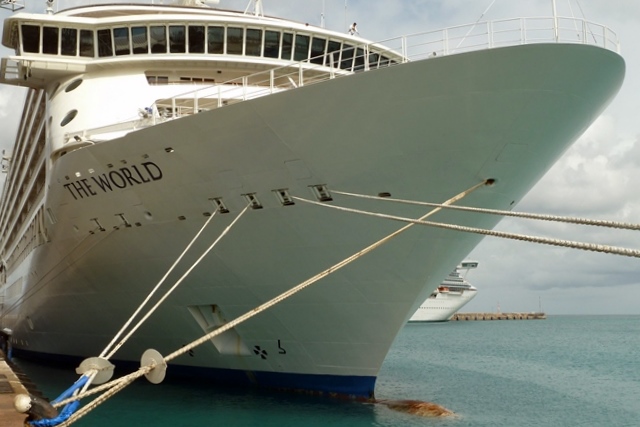 It saddens me that it has come to this, but where can she dock on a voyage? Nowhere, currently. 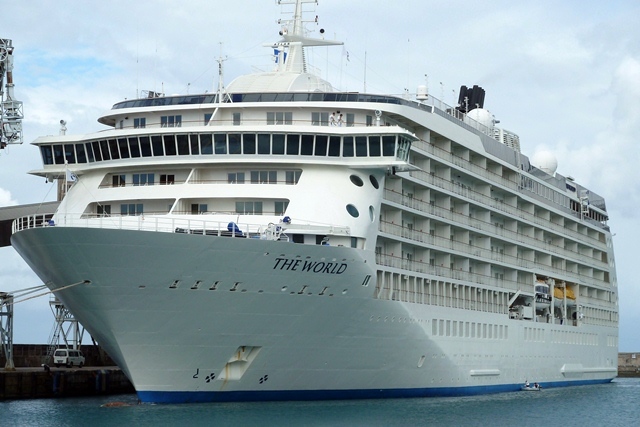 In case you’re wondering where I got these photos, I stumbled across MS The World in Barbados, well after I’d written and published The Globe. 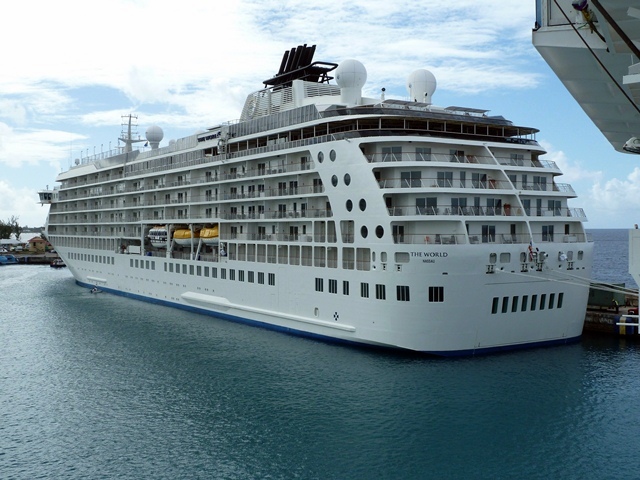 Let us hope that MS The World sets sail again in the near future, but that may be optimistic. At any rate, she’ll probably be back at some point. 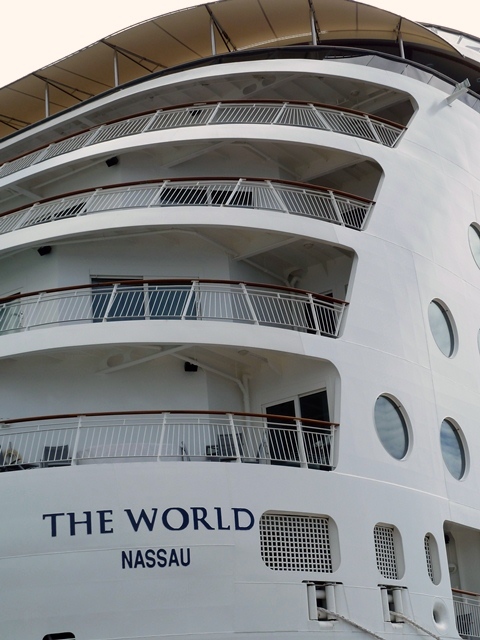 Since MS The World is laid up indefinitely, why not try an exciting excursion aboard her literary sister, The Globe? 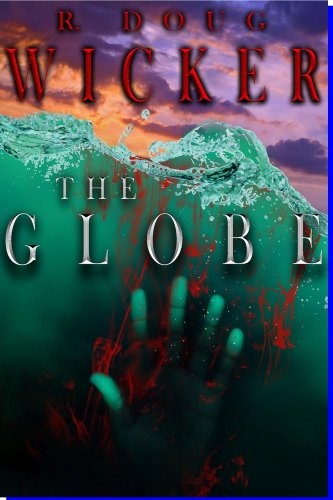 The Globe, a murder in luxury by R. Doug Wicker

Comments Off on The World, inspiration for The Globe, is removed from service

For You Last-Minute Fathers’ Day Shoppers — The 99¢ Sale 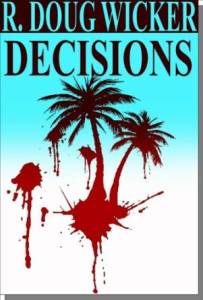 Decisions — for Kindle of Nook 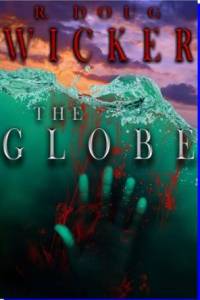 The Globe — for Kindle or Nook

Just a quick reminder for all you last-minute shoppers — Kindle and Nook editions of Decisions and The Globe are still on sale for only 99¢ each.

Donovan Grant lost his mind, his wife, and his career. Now he may be losing even more. Lately, and with distressing regularity, he’s been finding himself standing over dead people while holding the murder weapon. Even worse, he’s his own prime suspect. And that new woman in his life? She may be next on his list . . . that’s if he’s not on hers.

The Globe (Caution for adult themes; not appropriate for under 17):

The Globe—38,500 tons of ocean plying opulence housing in its fabulous apartments some of the wealthiest people on the planet.

Reynard Chevalier—The Globe’s security officer. An expatriate American with a new name, a new country, a new life, and a past that is rapidly catching up and threatening to destroy him.

Staff Captain Katarina Giordano—Reynard’s boss during the day, his lover at night.

Jane Hanover—The Globe’s latest resident. The fiancée from Reynard’s previous life. The woman who has sent Reynard’s past careening on a collision course toward his all too vulnerable present.

Charles Hanover, III—Jane’s philandering husband. A man who rationalizes his infidelities by demanding that his wife also find solace outside their marriage.

Security Officer Sarah Brighton—Reynard’s amorous Number 2. A woman too young for Reynard and too determined to accept no for an answer.

Sterling Heyward—The Globe’s reclusive owner and Reynard’s best friend and employer. A man whose enormous wealth was built spilling the blood of others.

The Globe Slasher—A sadistic sociopath with a very large chef’s knife and an insatiable blood lust for the rich and beautiful. A serial killer who has reached into the distant past to find inspiration for his perverse grotesqueries.

Louis Guignard—The French police captain. A man stationed in Saint Barts, hundreds of miles from The Globe. A man walking Reynard through his investigation via a very tenuous internet connection. A man who knows that it is only matter of time before the Globe Slasher turns on the one person aboard The Globe who can stop the slayings—Reynard Chevalier.

What Publishers Weekly said about Decisions:

An Agatha Christie inspired confection stays true to its roots, with enough clues and plot twists to keep the reader guessing until the end. Donovan Grant was an air traffic controller until a post-traumatic stress disorder renders him unfit to continue in the profession. He lands the job as pilot for the exclusive Vai Kai resort in the Fiji Islands where trouble arrives in waves. First Donovan starts having inexplicable blackouts, in which he becomes uncharacteristically violent. Then he ferries in a group that includes actress Kelly LaBrecque and her movie producer ex-husband, Sheldon Larsen. Kelly informs Donovan that every person in their group hates Sheldon’s guts. Finally, a hurricane knocks out the lights long enough for the first murder to occur and it looks like Donovan is the guilty party. Kelly, who seems romantically interested in Donovan, jumps to his defense. The novel is airy fun, carried by its two likeable and witty central characters. — manuscript review by Publishers Weekly, an independent organization
What others are saying about The Globe:
R. Doug Wicker is a witty, talented, entertaining writer with a knack for interesting plot twists and dialogue that snaps, crackles, and pops. With his captive-audience setting and an entertaining cast of characters that keeps you guessing, and then guessing again, the author’s latest novel, The Globe, becomes at once a funny, intriguing, serious, and at times even compelling novel. Better still, it’s a fast-paced read that ends much too quickly and leaves you hoping for a sequel, or maybe even a couple of sequels. Mr. Wicker is particularly adept in his descriptions and understanding of modern firearms, which is something that is often missing in current crime fiction. I found myself placing a bookmark next to the author’s name, where I’ll be waiting to sample his next offering of escapist fare. In a word, Bravo.–William Florence, author of the Max Blake Western series and Max Blake Mystery series.
The most underrated book I read in 2012 is The Globe by R. Doug Wicker. It’s underrated because it’s not selling particularly well, but should be. It’s a great read. You know when you read a certain book, you just know the author is extremely smart and you would like to have a beer with him? I feel that way about R. Doug Wicker, whom I’ve never met or communicated with, but would like to.
The Globe is a cruise ship, but not any ordinary one. It’s actually a floating condominium, and each cabin has a wealthy owner. Murders take place, and Reynard Chevalier, the erudite security officer must solve them. I love those murder mysteries that take place in a closed environment (the locked room conundrum popularized by Agatha Christie – think Ten Little Indians – and others). There’s a finite number of potential victims and suspects. Reynard is inexperienced as a murder investigator, and the number of plot twists tests his abilities.
Wicker handles all this cleverly with great deftness and an elegant writing style. You’ll be glad you discovered this delightful gem of a book. Five out of five stars.–RW Bennet, author of Suicide Squeeze and Love.com.