There are several ‘firsts’ associated with El Paso International Airport and the FAA Airport Traffic Control Tower (ATCT) facility which serves it. In the early 1960s the FAA commissioned famed architect I.M. Pei to design a new type of control tower. The FAA originally intended to install Pei towers at 50 airports around the country, although this number would eventually drop to 16. The Pei towers were taller and more advanced than any control tower used at the time. The first Pei tower, which was also the first U.S. control tower over 130 feet in height, was commissioned at El Paso International in 1968. The Pei tower design pioneered at El Paso eventually went into service at some of the busiest airports in the country, including Chicago O’Hare, Lambert-St. Louis International, Houston Intercontinental, and Tampa International.

I.M. Pei-designed Control Tower — The first and one of the last still in use

In 1998, the FAA selected El Paso Airport Traffic Control Tower’s Terminal Radar Approach Control (TRACON) as the test site for the most ambitious terminal radar automation upgrade in over thirty years. The Standard Terminal Automation Replacement System (STARS) replaced the antiquated ARTS IIIA (Automated Radar Terminal System), which was designed back in the mid-1960s. El Paso went operational with the earliest test version of STARS on December 10, 1999, and successfully implemented STARS ‘Full Service Version 1’ on April 30, 2002. Since then, STARS has become the standard system throughout the FAA, and is an integral part of the TAMR (Terminal Automation Modernization Replacement) system currently being installed across the nation.

Throughout NASA’s Space Shuttle program, shuttle pilots departed El Paso International Airport in specially modified Gulfstream II aircraft called the STA (Shuttle Training Aircraft). These STAs would fly to the military ranges to the north climbing to 18,000 feet, and then practice a 20° descent approach at 300-knots/345 mph/556 kph to a runway. Compare that to a normal jet approach of 3° at 150 knots.

Upon completion of several approaches, usually around ten, the STA would then head south and recover at El Paso International Airport. (To read about what it was like to fly on one of these training missions, see: Flying on a Shuttle Training Mission)

A less auspicious “first” occurred in El Paso on August 3, 1961. Leon Bearden and his son, Cody, were the first people in the U.S. to hijack a jetliner. The two were aboard Continental Flight 54, a Boeing 707 flying to Houston from Los Angeles with scheduled stops along the way in El Paso and San Antonio. Over New Mexico the elder Bearden pulled out one of the two guns he and Cody had smuggled aboard. He then took a flight attendant hostage, forced his way into the cockpit, and demanded that the pilots fly them to Cuba. Captain Byron Rickards (who also just happens to hold the Guinness World Records distinction of being the first pilot ever hijacked in an incident that occurred thirty years prior in Peru) convinced Bearden that the plane would have to land at El Paso to take on enough fuel for the flight. Four passengers volunteered to remain aboard the 707 as hostages, and the Beardens allowed the remaining passengers to disembark. 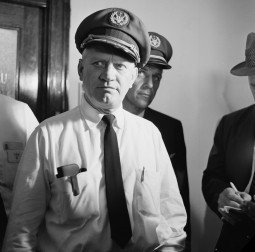 After nine hours of stalling, the elder Bearden demanded the pilot take off immediately. As the plane turned for the runway the FBI opened fire, flattening the tires and disabling one of the engines. One of remaining hostages, off-duty Border Patrol agent Leonard Gilman, who was also a former boxer, took advantage of the distraction to strike Leon Bearden. Bearden went down, stunned. The FBI stormed the plane, taking both father and son into custody. And Leonard Gilman walked away a hero with a broken hand from the blow he delivered to Leon Bearden’s face.