Reynard Chevalier and Sterling Heyward of The Globe 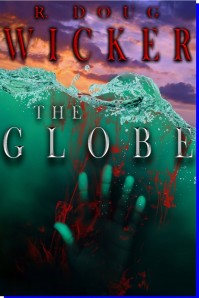 Sterling Heyward is Reynard’s polar opposite in life—incredibly wealthy and perhaps not beyond a little illegal trade if the price is right.  Sterling owns The Globe, but he doesn’t own Reynard.  Reynard may work for Sterling, but the two are now bound by friendship.  Perhaps I should let Reynard explain a little about them both:

Fortunately my duties isolated me from the residents of The Globe, except for the occasional piece of missing jewelry often first blamed on some innocent suite steward until it inevitably showed up where the owner last left it.  There were no petty thieves among the crew of The Globe.  The Lord of The Globe (not to be confused with the mere Master) saw to that, just as he’d seen to hiring me to make certain of it.  Other than those thankfully infrequent interactions, my duties remained mostly out of sight of the residents—such as ensuring everyone’s security by overseeing the monitoring of everything . . . and everyone . . . brought aboard, and by being ready to handle any crimes at sea occurring while in international waters and outside jurisdictional political boundaries.  I meticulously enforced the former but had thankfully never encountered the latter.  I just don’t do jurisdictions very well.  That’s the primary reason I’m no longer an American citizen.

While the Master of The Globe was Captain Sven Svensson (whom I call Sven-Sven from Sveden when we’re alone), the Lord of The Globe was Sterling Heyward.  Sterling Heyward’s name might not mean much, but the company he inherited from his reclusive father certainly does—InterGlobal Armaments.  InterGlobal Armaments made Heyward’s father a billionaire after World War II when he acquired vast stockpiles of used arms and sold them to everyone from collectors of guns in the United States, to collectors of purloined votes in South America, to collectors of rivals’ heads in tribal Africa.  Rumor was that old man Heyward went from working for the Office of Strategic Services in World War II to opening his own little front operation for the CIA, the post-war successor to the OSS.  He used his intelligence connections to sell post-war surplus arms and ammunition at a premium to U.S.-backed despots and rebels alike.  Only adamant, rabid anti-Communists need apply in those early Cold War days of the Big Red Scare, regardless of ruling quality or compassion.  Sam Heyward once boasted that the only non-Communists to whom he never sold arms were Idi Amin and Muammar Gaddafi.  Considering the less-than-stellar political talent left beyond those exclusions, that was hardly something about which to brag.  And when Sam wasn’t fronting arms sales for the Agency, he was making a fortune selling imported weapons to collectors, gun enthusiasts, and paranoid militia-types in the U.S.  At any rate, it was said that young Sterling got his name from Dad’s preferred currency for his products and services, an odd preference old man Sam developed even before relocating to Switzerland ahead of some much-despised publicity being generated by Congressional witch hunters and incensed media in their latest joint outrage de jour.

When Sam passed away, Sterling took over.  Unfortunately, Sterling showed less judgment in his clientele than even his father, and I came to his attention when I intercepted one of InterGlobal’s arms shipments—a delivery that was, unbeknownst to Sterling (he claimed), slated for the Taliban in Afghanistan.  Let’s face it—if you’re supplying the Taliban then you’re supplying al Qaeda.  And whether it’s intentional or not, that’s just damned bad manners no matter who you are or how much your net worth.

I was working for the French at the time, having been discharged from my home country’s military, ‘For the good of the service,’ following my court martial.  I was convicted of insubordination and failure to follow a direct order.  The charge of assaulting a senior officer was dropped.

In thorough disgust, I exchanged U.S. military service for French military service, renouncing my U.S. citizenship and changing my identity along the way.  I eventually found myself in Afghanistan as part of the NATO contingent.  Ironically I was defending the honor of the country I’d long since renounced and left behind.  And thus it was while in Afghanistan that I and one of Sterling Heyward’s wayward arms shipments crossed paths.

So when Sterling Heywood came along with the promise of a huge raise in pay for a lot less bullet catching, I developed Legionnaires Disease—meaning that the French paid merde—and jumped ship, so to speak.

Which is how I ultimately came to be an American-born French citizen (Français par le sang verse—French by spilled blood.  And, no, the wound wasn’t all that bad, but thanks for asking.) using a French name while traveling the world under a French passport aboard a Bahamian flagged ship owned by another expatriate American with Swiss citizenship, a Swiss passport, and an affinity for British currency.  How more cosmopolitan can one possibly get?

4 responses to “Reynard Chevalier and Sterling Heyward of The Globe”